On Friday afternoon, President Donald Trump approved the ban on certain immigrants in America. The executive order suspended the entry of all refugees and citizens of seven Muslims countries to the US for three months. The administration’s ban came as one of the first executive orders emitted by Trump. Being such a delicate issue and regarding one of the US’s cornerstones, the ban caused a massive storm of reactions from the general public, including celebrities.

American immigration is quite a big issue in society and has been going on and off for a while. Despite Trump’s order people expressed support to immigrants and refugees. They also protested Trump’s order as many considerit an anti-American move.

The order has been heavily criticized since it goes against everything the US stands for and Americans beliefs. The Founding Fathers were pro-immigration, and always believed and fought for an equal and fair treat to all people.

Highlights of the Immigration Order.

One of the highlights of the Immigration order is that it’s religious discriminatory since it prioritizes Christian refugees. Also and even more scary is the fact that it tries to define what non-Us citizens should believe, “The United States cannot, and should not, admit those who do not support the Constitution, or those who would place violent ideologies over American law.”

The order exempts some people, such as diplomats and people traveling to the UN in NY. But the list can expand and it suspends all admissions of refugees not only from those seven countries.

Protestors banging on the walls of the terminal here at JFK. Police have blocked the entrances. pic.twitter.com/ryrkQx8H6l

Civil organizations, such as the American Civil Liberties Union prepared a legal demand against the US Government. The demand resulted in a temporal blocking of deportations of valid visa holders that landed in the US. This was granted by Federal Judge Ann Donnelly in Brooklyn.

Celebrities said a big NO to the Muslim ban.

Artists and celebrities raised their voices to protest the Muslim ban. Via social media, they take a stand regarding the social issue by showing their support to refugees and immigrants around the world.

On Sunday during the SAG Awards, Simon Helberg and his wife Jocelyn Towne protested in the red carpet against the newly applied ban. 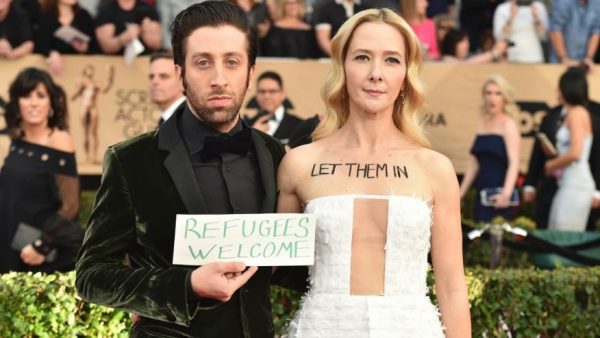 Other artists used social media to express how they felt:

Disgusted! The news is devastating! America is being ruined right before our eyes! What an immoral pig you have to be to implement such BS!!

My best friend, Alaa Mohammad Khaled, is Muslim. His parents were Palestinian refugees. His brother is DJ Khaled. #RefugeesWelcome pic.twitter.com/qXOapgvvF7

.@realDonaldTrump FYI this endangers our armed forces in the future. Who would want to help us, when this is how we repay interpreters? https://t.co/JpaeRb84uz

As someone who was born in Pakistan I can tell you coming into America is VERY difficult. A #Muslimban accomplishes nothing but hate.

Honestly I feel like we are in a nightmare right now!! In a country founded by immigrants how did immigrant become a bad word!!! #nobannowall #unitedwestand #nomuslimban #sayingnothingissayingsomething #standup #loveistheanswer

For me, America is great because of all the people who came here. Not in spite of them. #NoBan