America has spoken and decided to choose Donald Trump as President for the next four years. During the past few months, we have experimented a very intense campaign between Secretary Hillary Clinton and this businessman.

The surveys showed the candidates at a very close race to the White House, creating a tense weather in the country and the rest of the world. Although the surveys showed Clinton as the candidate most likely to win, the news shocked us this Wednesday morning when Trump became the 45th President of the United States.

The new president took his victory to Twitter, as he called it “beautiful and important.” President Obama invited Trump to the White House to discuss the next steps. In his speech, the businessman thanked his wife and family for how they helped him achieve this goal.

The statistics were very tight between the candidates during the last few days- However, despite all of the offensive comments Trump said during his campaign, he managed to get to the White House. Making his victory, a surprise for many.

A large number of Celebrities shared their political views during the Presidental campaign, to influence young voters. So you can imagine, they didn’t think twice when they took social media after hearing the results: 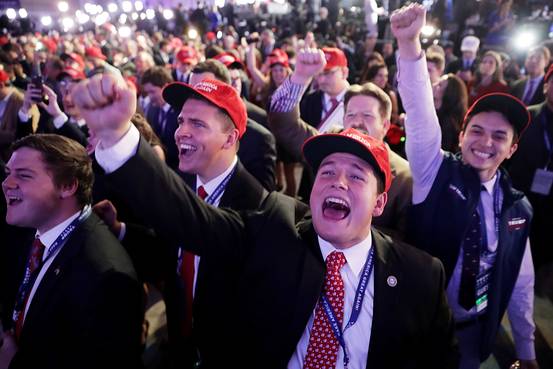 Some celebrities are having a hard time accepting Trump’s victory.

Fear, anger, and negation, where some of the feelings.

As cynical as I tend to be, I cannot believe how badly I overestimated the decency of the average American.

Somewhere tonight there’s a little, racist, narcissistic, woman-hating, Jew-baiting kid who now knows that he can grow up to be President.

Really, people? ANYONE can be President? ANYONE? ANY-ONE?

This is a national disaster. An illiterate, bigoted, misogynistic, racist, rapist has become president. I have no words

Where is #OliviaPope when you need her?

I will not kneel. I will continue to fight for equality. I will spread love. I will be a warrior of education & kindness. I will NOT kneel.

I want to quit life.

Some used their voices to create conscience about the next steps for the Nation.

The positive element from all this is that we can no longer pretend that we are free of racism & sexism. The question is, what do we do now?

As I wake up today with a broken heart I feel the need to be positive. To prepare myself for the things I cannot change. As I read and understand everyone's pain it makes me want to pray for everyone else's broken heart who believed in Hillary and her vision. Today we must move forward and spread love and positivity. This new president has a lot of work ahead of himself to heal the divide, I wish him well. For the sake of our beautiful country. Not the blue states. Not the red states, but for THE UNITED STATES of AMERICA. 🇺🇸🙏🏻

Do not sit still. Do not weep. MOVE. We are not a nation that will let HATE lead us.

Sometimes a few words can express so much more.

I am in tears

I love my country but right now I feel so ashamed.

I am just absolutely beside myself right now. I can’t believe the way this thing has turned. Trying to remain hopeful but geeez louise.

Woke up feeling like I’d had a nightmare. Then started crying again. Mantra: I am not alone, we are not alone.

Luckily a few ones are happy.

Congratulations @realDonaldTrump for your stunning victory over your opponent! Looking forward to making AMERICA great again!

Great faith in God works. Mr @realDonaldTrump I’m proud to call you President of the United States of America. And First Lady @MELANIATRUMP

As his first speech as President, Donald Trump asked the help of those who didn’t support him by saying:

“This is so important to me. For those who have chosen not to support me in the past, of which there were a few people, I’m reaching out to you for your guidance and your help so that we can work together and unify our great country. As I’ve said from the beginning, ours was not a campaign, but rather an incredible and great movement, made up of millions of hard-working men and women who love their country and want a better, brighter future for themselves and for their family.”.

Trump also informed that Clinton had congratulated him on his victory, as he asked the people to give him a chance. That is the very next step America must take.