According to some data, since 1972 a group of satellites has been watching us from space, and now almost 40 years later the images they took reveal how much we have influenced the earth. We can clearly see our footprints marked.

We will show five human activities that have left a mark all around the globe, and to be honest, not a good one.

Is defined by clearing or removal of a forest or a stand of trees where the land is converted to non-forest use. We, humans, cut trees for many reasons, usually to sell them as fuel or timber. Also, we cut them down to use the geographic space whether for homes or commercial purposes. Like for example beef raised in Rondonia, Brazil, is sold all around the globe.

Through the years deforestation has been more noticeable. The pink areas in the next picture are the part where deforestation has occurred in Brazil. We have lost nearly 50% of the world’s original forest, and each year we lose about 13 MILLION hectares of forest. 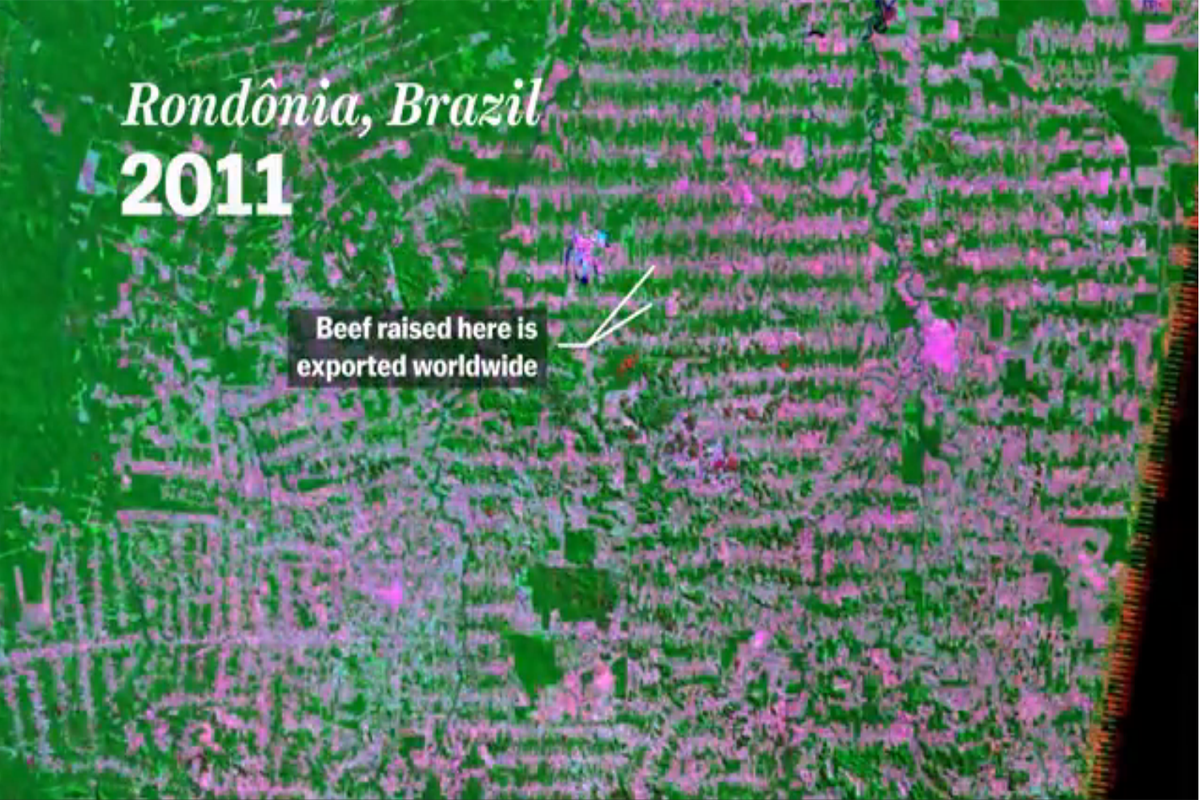 Contamination and irresponsible use of this non-renewable source can cause significant harm in water bodies such as rivers, lakes, oceans; it also damages the entire biosphere, every plant and living organisms get directly affected which causes not only individual damage but also costs to the biological communities.

The Aral Sea was one of the four largest lakes in the world, but the two most important canals were dragged in order to irrigate the desert in the early 60s. The canals in which the water was dragged were poorly built causing the water to evaporate and leak, leaving this river in its current state.

The uncontrolled expansion of urban areas. The impact this has on our environment are mostly negative. Did You Know? The percentage of Canadians living in cities increased from 45 percent in 1911 to 80 percent in 2006. That A LOT.

The urban sprawl has made vegetation visibly lower and as you can imagine is not sustainable. Agricultural lands are usually lost fast due to urban sprawl. In the next picture, the red parts are vegetation.

In the US, 40% of the energy comes from burning coal. Air-pollution coming from coal-fired power plants includes sulfur dioxide, nitrogen oxides, particulate matter (PM), and heavy metals, leading to smog, acid rain, toxins in the environment, and numerous respiratory, cardiovascular, and cerebrovascular effects.

The burning of fossil fuels produces around 21.3 billion tons of carbon dioxide per year. To dig out coal, you have to go about 100-400mt

Yes, you’ve probably heard about this one before but let’s look this a little bit deeper. Global warming is the rise in average surface temperatures on Earth. It is caused primarily because of the human use of fossil fuels, which releases carbon dioxide and other greenhouse gasses into the air. This causes sea levels to rise, icebergs to melt and much much much more consequences which are severely discouraging

Climate change has a huge effect on icebergs. Icebergs are floating pieces of sea ice measuring at least 5 meters. Global warming contributes to the loss of a tremendous amount of sea ice, enough to equal 1.5 million icebergs the size of the Titanic every year.

Look At The Video Below