The red carpet’s looks are the ones that set the biggest trends. On February 22, the 2017 Brit Awards were held, becoming the 37th edition of the British Phonographic Industry’s annual pop music awards.

The O2 in London, was the place where the ceremony was held and we got the chance to see our favorite artists on the red carpet. Sometimes the stars have their fashion fails too but it seems this year the show was full of good taste. Here is a list of the red carpet’s hottest looks.

After three years, Katy Perry performed at the ceremony in her first UK TV appearance. She totally rocked the red carpet by wearing an embellished mini dress that featured sequins and fringe with a matching blazer.

Little Mix was one of the most nominated groups. The girls showed up looking fabulous in an eclectic choice of dresses. Their performance was also one of the most anticipated of the night.

Male stars usually play it safe when it comes to their awards show fashion sense. The1975 was not afraid to try something new, even though some people said: “they have dressed in a cross between pajamas and suits.” 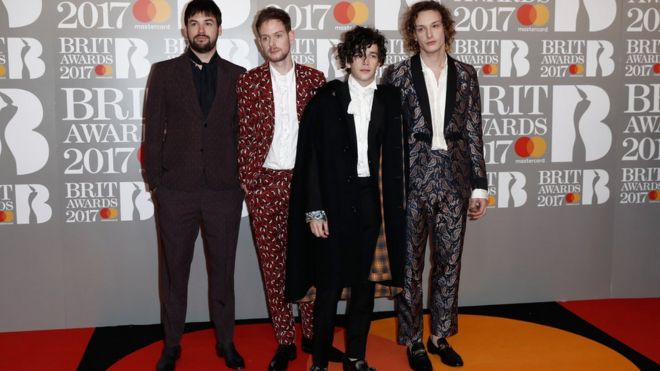 The British band decided to use the tube to get to the O2 on Wednesday night, in order to beat the rush hour traffic. The fun part was that when they arrived it seemed a bit like they were still dressed for the Tube.

Ellie dazzles in a daring thigh-split peekaboo gown. The singer was dressed to impress in the figure-hugging attire, featuring a daring cut-out at the bust and silver chain detailing.

Billie JD Porter attended The BRIT Awards 2017 at The O2 Arena wearing a clear pink silk dress with some details in black lace. The final touch of her look were the black platforms that gave her a metal sexy style.

The Saturdays singer, arrived at the BRITs red carpet with a lavish faux-fur throw slung across one shoulder with a thigh-skimming silver mini dress that gave a glimpse of both her cleavage and enviably leggy figure.

This singer has been known for making great fashion statements during her appearances. The star dazzled in a heavily fringed, gun-metal gray dress from celebrated designer Julien MacDonald at London’s O2 Arena.

Nicole looked stunning in a plunging scarlet dress designed to look like a blazer with a  pair of matching thigh-high boots. Scherzinger also proved to be overkill by wearing this tweed design that was interspersed with flecks of gold.

Abigail always looks perfect, it does not really matter what she wears. The actress showed off her model legs by wearing a one-shoulder striped deconstructed tuxedo dress at the BRITs Awards.