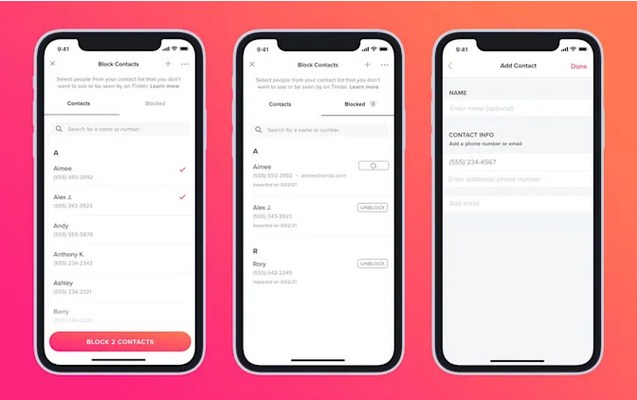 Not everyone wants their friends, co-workers, and family members to know they are active on Internet dating apps. And most people won’t want to come across their exs on dating apps either. So Tinder released a new Block Contacts feature that enables you to block just about anyone on the app so that you can play your dating game in absolute privacy, discretion, and liberty.

A Tinder survey showed that 40% of users have come across their former lovers on the app, 24% met a family member, and one in 10 found their college professors. Furthermore, some people came across their stalkers on the app as well as exs that broke their hearts months ago. So to prevent this from happening and suffering some unwanted consequences, Tinder went a step further to introduce the block feature so that users can block out anyone they don’t want to see.

Users that block unwanted persons won’t see those persons on the app, and the persons won’t see them or even know they are on the platform. This way, users can feel safer using the app and not fear any private embarrassments from family members or college professors. In fact, users who use the app to cheat on their partners can do so with absolute liberty and confidence.

To block anyone from showing up on your suggested lists or from seeing you on the app, you must go to Settings beneath your profile icon and then select Block Contacts to also grant permission to the app.

Once you do this, your Contacts will come up, and you must then tap on Block Contacts to block each individual that you don’t want to see or allow to see you. If individuals had been blocked earlier on your mobile device, you must also block them on the Tinder app as well.

The block feature was tested in Japan, India, and Korea, and most people who activated the feature blocked about 12 contacts on average.

Bernadette Morgan, Group Product Manager, Trust & Safety at Tinder, revealed in a statement that “we’re rolling out Block Contacts as an additional resource empowering members with peace of mind by helping create a worry-free space for them to spark new connections.”