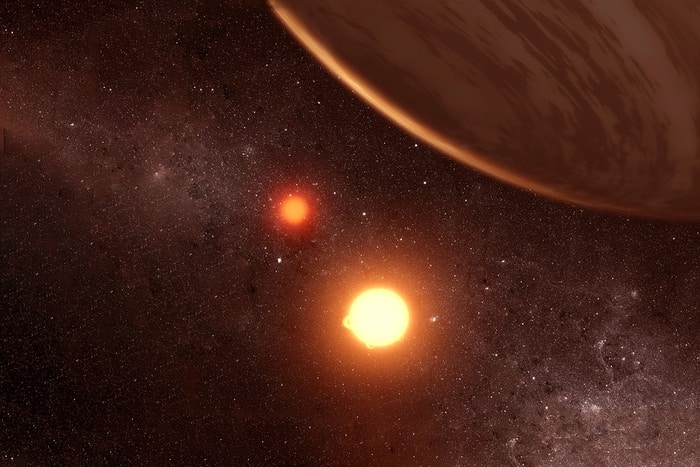 Researchers from the University of Geneva in Switzerland have found a distant planet where iron rains from its sky. Named WASP-76b, this planet is 640 light-years distant from our Earth and located in the constellation of Pisces. The researchers said the planet is twice as wide as Jupiter and published their findings in the journal Nature.

The scientists were able to discover WASP-76b using the European Southern Observatory’s Very Large Telescope in northern Chile. Led by Dr. David Ehrenreich, a professor at the University of Geneva, the researchers said the exoplanet’s temperature during the day is over 2,400 degrees Celsius – hot enough to vaporize metals. But at night, the temperature comes down by 1,500 degrees Celsius, indicating the iron condenses in its skies and rains down.

“One could say that this planet gets rainy in the evening, except it rains iron,” David Ehrenreich said. “Imagine instead of a drizzle of water droplets, you have iron droplets splashing down.”

The reason this is possible is largely that the iron-raining planet has its dayside turned permanently to face its parent star as it rotates around it – just as the moon has the same side turned to the Earth as it revolves around it. But its cooler night side remains locked in constant darkness.

“Just like the moon around the Earth, this planet always keeps the same face towards its star as it rotates around it,” explained Jonay Gonzalez Hernandez, a researcher at the Instituto de Astrofisica de Canarias in Spain. “This causes this extreme difference in temperature between day and night on the planet.”

The radiation the exoplanet’s dayside receives from its parent star is more than the Earth receives from the Sun, hence the scorching hotness which separates molecules into atoms, making metals such as iron to evaporate into its atmosphere. The extreme differences between the day and night temperatures result in up to 10,000 mph winds that move the iron vapor from the hot dayside to the cool night side, making temperatures drop to around 1,500 degrees Celsius.