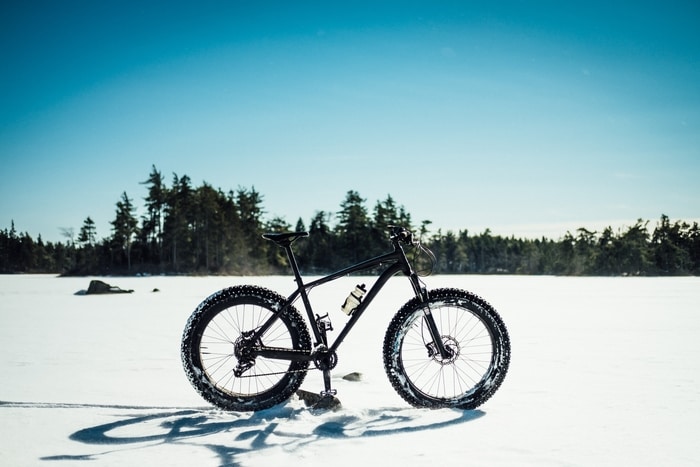 For those living in colder climates, putting away your beloved bike for the season can be difficult. The summer months pass far too quickly. Now, imagine a bike that can handle icy trails, frozen fields, and gnarled ravines without the dangers of slipping or breaking apart. Thanks to innovations in modern technology, a bike such as this does exist. These days, instead of 5-month season, a 12-month season is a real possibility. Fat bikes are the newest trend in on-road and off-road adventuring all over North America and Europe.

What are Fat Bikes?

Fat bikes are similar to mountain bikes with larger tires, that can be used for adventures in any terrain, from the snow to the concrete jungles of our major cities.

Although older models were more difficult to control, the newest innovation has made handling fat bikes much easier.

Over the past few years, fat bikes have grown from a specialty niche into the mainstream.

Frames can be found ranging from aluminum, steel, carbon, titanium, and even bamboo.

Origins and Evolution of Fat Bikes

Fat bikes originated in Alaska as a tool to specifically navigate snowy terrain.  Now, however, they are used in all challenging terrains.

Fat bikes are often used for off-roading adventures because of the durability and stability of their tires.

Over the years, evolving styles of riding and the creation of new trails have changed fat bikes. Nowadays, they are used for both racing and recreation. Better frame construction has been one of the major changes implemented as well. Riders now ride year-round on increasingly challenging terrain because this construction allows for better handling in extreme weather conditions.

One of the benefits of fat bikes is that they allow you to ride during every season and in almost every geographical landscape. Mountain bike season never has to end, and it is possible to travel through terrain that was previously too difficult to traverse or pedal.

No longer limited to snow, fat bikes are now seen in all terrains, including sand, dunes, bog, mud, and drifts. However, they continue to excel in the snow.

The tires on fat bikes provide more traction on terrain, it is easier to climb steep hills, navigate winding ravines, without threat of injury.

In addition, fat bikes may open up the winter season to those who had previously not been fond of the cold. Riding in the snow can be a beautiful experience. Imagine experiencing the winter in a different way, while seeing the enchanting landscape.  It is possible by dressing appropriately. Be sure to cover extremities such as your fingers and nose. The wind rushing past can cause frostbite. In addition, take care not to overdress, but do not underdress either. Layers can be put on and taken off.

In both summer and winter months remember to hydrate. Take an insulated water bottle in the winter.

Budget bikes are perfect for beginners who want to experiment with riding but are not sure whether they are ready to make the investment, or do not have the budget for a high-end bike.

Budget bikes can offer great value for money and are offered by various renowned mountain-biking companies.

High-end fat bikes are for the more serious connoisseurs of riding and have many added benefits, such as extra lightweight construction and being able to travel at very high speeds. Many are made from bamboo tubing for a lightweight experience and offer full-suspension for the most comfortable ride possible.

Fat bike tires are often between 4”-5”. They are also low pressure, which allows them to float where other heavier tires, would sink.

Many fat bikes can also be rented in these destinations by beginners or those who cannot travel with their bikes.

With winter quickly approaching, you do not have to mourn the end of bike season. Whether you are a novice rider, or an experienced one, there is a perfect fat bike out there for you.