Everybody is melting over a pair of biracial twins that are the cutest thing ever. The twins are the daughters of an interracial couple from Quincy, Illinois. Jarani and Kalani are taking over the internet with their cute smiles.

Their parents Whitney and Tomas, had the cutest surprise when they first laid eyes on them and found out one was light and the other was dark. The twins are a true miracle since is extremely odd for this to happen.

Biracial twins from an interracial couple.

An interracial couple from Quincy, Illinois was expecting twins. Whitney Meyer is white, while her boyfriend, Tomas Dean, is black.

The couple got the sweetest surprise ever when they first looked at their newborns last April. They couldn’t believe their twins had different skin colors.

While Kalani looks after her mother and is white skin and blue eyed; Jarani shares her father’s skin tone and beautiful dark eyes.

Different but sisters by heart and blood.

Most twins share distinct physical features, and in the case of Kalani and Jarani, they share different skin color. Even when this is not so usual, it does happen 1 in every 500 cases of interracial twin babies. These cuties are really special, they are an extraordinary case!

The babies also have unique personalities. Whitney says that the twins have pretty different personalities, while Kalani is more energetic and likes to crawl everywhere, Jarani loves to cuddle and to be in her parent’s arms.

People are simply in love with these biracial twins even when most times they can’t believe they’re twins. Whitney says that “When we go out in public, people will start looking at them because I dress them identical and I can tell they’re confused.” 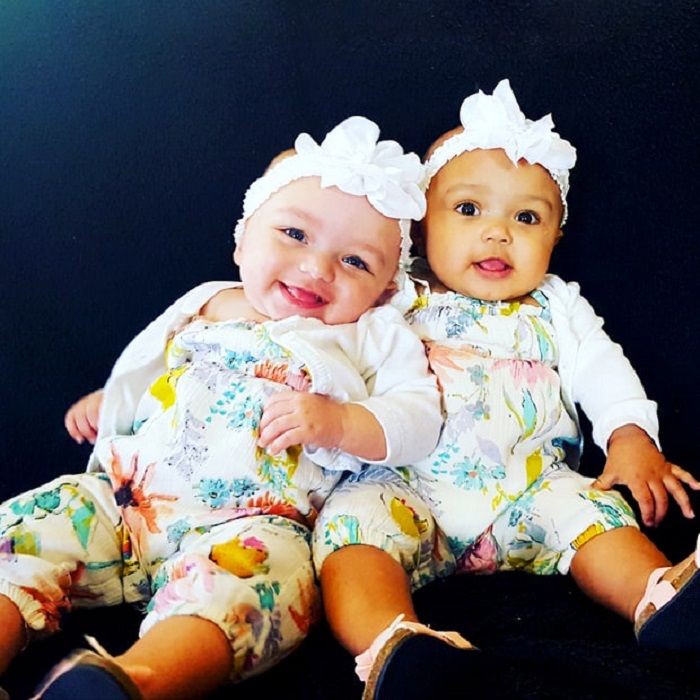 Love is colorblind and pure.

The babies have a big brother who loves them and reads them every night. Talan, 7, is Whitney’s son with a different partner. She states that he doesn’t see any difference in his lovely sisters and loves spending time with them.

Talan’s purity is simply beautiful, Whitney says  “People in this country could learn a lot from my son. He’s so innocent, he doesn’t understand racial tensions, because to him it doesn’t matter, as it shouldn’t matter to anyone else.”

Whitney and Tomas lost a baby boy two years ago, in a tragic drowning incident. The family considers Kalani and Jarani’s arrival a beautiful miracle. Not only they’re helping Whitney heal her heart but can be a beacon of love and compassion in this tense moment.

Whitney says that the response she’s gotten to the biracial twins is heartwarming, she also says “It restores my faith in humanity, at a time when I, when this country, really needs it.”