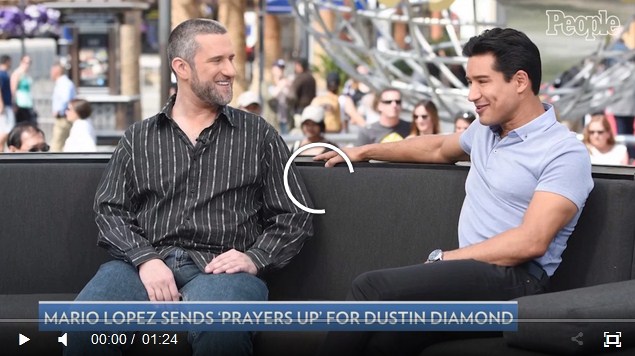 Actor Dustin Diamond, known for his role in the American teen sitcom Saved by the Bell, has been diagnosed with stage 4 cancer. The actor was hospitalized this week; his representative, Roger Paul, has come out to confirm reports concerning Diamond’s health challenge, EW reports.

“We can confirm that Dustin does have cancer,” Paul told news reporters. “It’s very serious, though we are still waiting for more details, which we will have shortly.”

Paul noted that Diamond was in a lot of pain. Speaking with Entertainment Weekly, Paul said that the actor was undergoing chemo treatment for cancer and would be in the hospital this week and the next pending when the step course of action is decided upon.

“By next week, we’ll have a much better understanding of the severity of his condition and what treatments he will need so that he’s comfortable,” Paul stated.

He added that when Diamond first got admitted to the hospital, he was always blacking out, tired, and constantly sleepy. Asides from infection with shingles, the rep noted that Diamond was in a lot of pain.

Information first got to the public on the health challenge of Diamond when his team announced via his Facebook page that the actor had cancer. It said more information would reach the public as plans were being made to chart the way forward. An Alpine Rd, Rockford, Illinois address was provided where fans could send their letters or cards. Although the concerns and prayers of fans and well-wishers were well appreciated, the public was asked to respect the privacy of the ailing actor at this point.

People Magazine first broke the news of the actor’s hospitalization on Tuesday. Although at that time, the celebrity news magazine did not disclose the particular illness the actor was down with. TMZ said Diamond was admitted to the hospital on Tuesday after complaining of body aches.

The actor first came into the limelight following his role in the 1990s teen sitcom Saved by the Bell, where he played Screech. The show recently made a comeback on NBCUniversal’s streaming service, Peacock, but the Diamond was not cast.

The actor was not happy about his non-feature in the reboot of the series. He complained bitterly in an interview with TMZ early last year, saying everyone involved in the original series should have made it to the reboot.