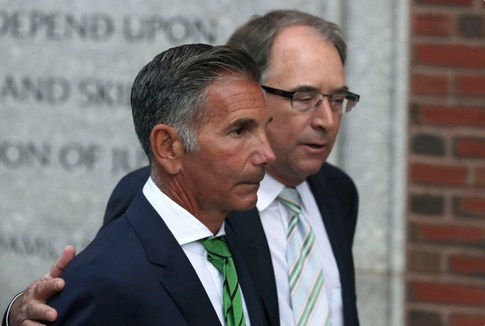 Mossimo Giannulli, Lori Loughlin’s stylist husband, wants to spend the rest of his sentence in house incarceration, according to court documents that his lawyers filed on Thursday. Giannulli was sentenced to five months imprisonment after he pleaded guilty to the controversy that exposed what some rich parents do to get their children into prestigious colleges. The lawyers stated in the emergency filing that Giannulli has had to spend 40% of his incarceration in solitary confinement.

“As a result of the amount of time Mr. Giannulli has had to spend alone in solitary confinement, there has been a substantial hit on his physical, mental and emotional health,” the lawyers stated in the motion.

The lawyers disclosed that Giannulli spent his mandatory COVID-19 quarantine at the Federal Correctional Institution Lompoc, California, a low-security federal penitentiary. The attorney stated that after the quarantine which started November 19, the fashioned designer should have been sent to a minimum-security camp, instead, he was sent to solitary confinement in a medium-security prison. He stayed there for more than 50 days, with only three brief 20 minutes repose every week, Yahoo reports.

According to the attorneys, the designer was finally sent to the camp on January 13. The lawyers also stated that the Bureau of Prisons carried out coronavirus tests on Giannulli every fortnight. The tests always came out positive but that didn’t stop prison authorities from taking him back to solitary confinement because of other inmates that tested positive, the designer’s lawyers stated.

“The Bureau of Prisons has mandated all inmates and prison officials to re-quarantine whenever someone tests positive, even though all the inmates are confined 24 hours every day and have no direct contact with others,” the attorneys stated.

The lawyers cited the BOP’s COVID-19 measure that allows prisons to lower the number of inmates by giving some inmates the chance to complete their sentences by being confined in their houses, as one if the reasons for the emergency motion. The lawyers stated that placing Giannulli in solitary confinement is also harsher than the recommendations of the court that sentenced him.

Giannulli and his wife pleaded guilty to playing a part in the college admission scandal of 2020. The couple stated that they intended to engage in wire and mail fraud to get their daughters into college with the wrong credentials. Giannulli was sentenced to five months of imprisonment and mandated to pay $250,000 in fines. His wife completed her two months prison term in December.