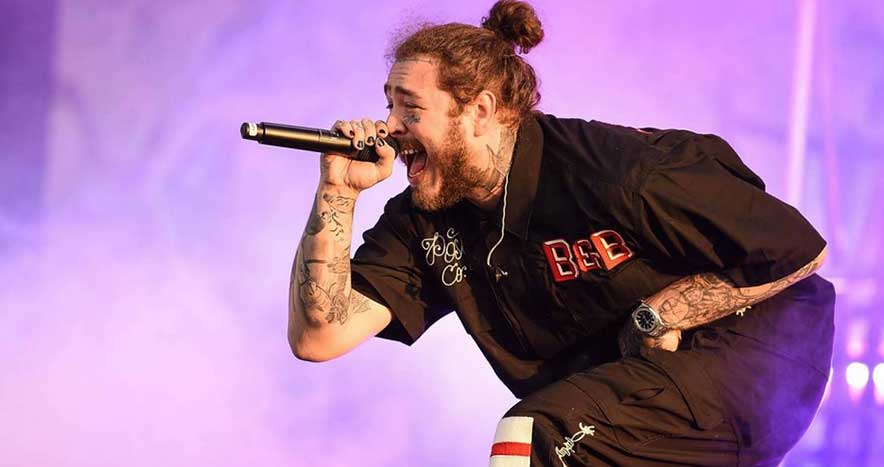 Rapper Post Malone fell onstage while performing in St. Louis on Saturday night. He fell through a trapdoor and landed on his ribcage, lying on the floor for several minutes until medics rushed to attend to him. He told his fans that he would be back as he was being led off the stage; and 15 minutes later, he returned to the stage to complete his set.

Malone tripped into an uncovered hole that had been used to lower his guitar and other equipment to the stage below. Somebody had forgotten to cover up the hole before the incident happened. He was performing Circles before he tripped and fell. He promised his fans that he would return to perform – and at his return 15 minutes later, he performed “Rockstar,” “Cooped Up,” “Sunflower,” “Congratulations” and “White Iverson.”

“St. Louis, I’m so fucking sorry I ruined the show tonight, ladies and gentleman,” he apologized before continuing with the songs. “I promise next time I come around, I won’t fucking wreck y’alls night, I’m sorry for that. That being said, fuck…that being said, I want to thank you for your patience and I’m sorry.”

The rapper started his Twelve Carat Tour on September 10 following the release of his Twelve Carat Toothache album. The tour started in Omaha and it proceeded to St. Paul, Chicago, Milwaukee, and St. Louis. He will touch Boston, Detroit, New York, Atlanta, and then Los Angeles on November 15.

Although his latest album performed below expectation at No. 2 at the Billboard 200, his 2018’s Beerbongs & Bentleys and 2019’s Hollywood’s Bleeding did better at No. 1.

In 2017, Travis Scott fell into a hole at the O2 Arena in London while performing with Drake. He still managed to complete his set. In 2018, Del The Funky Homosapien fell at the Roskilde Festival in Denmark and was hospitalized for several days to undergo treatment.

“I’m doing OK,” Del The Funky Homosapien said after he was discharged from hospital. “I’m still in a lot of pain. I’m on pain meds. I fractured seven ribs and punctured my lung. I had to have surgery. I had a tube in my lung pumping the blood and air out. I also had a epidural in my back to inject morphine directly to my bloodstream. After about five days, they let me out the hospital.”