A judge gives green light to a lawsuit made by Dr. Luke because of a tweet that pointed him for raping Lady Gaga. The tweet was made celebrity lawyer Mark Geragos.

In 2014, Geragos, who was back then representing pop singer Kesha Sebert, published a tweet with a link to an interview of Howard Stern with Lady Gaga, in which the singer confessed him that she had once been sexually assaulted by one of her collaborators, without mentioning any names. Along with the link, came the question of Geragos to his 48,000 followers “Guess who the [rapist] was”. A user responded “Lukasz” – referring to Dr. Luke’s real name, Lukasz Gottwald –, and Geragos retweeted the answer, commenting “#bingo”.

Guess who the rapists was? http://t.co/MTg0vSE3rr

The lawyer later told TMZ that he said it “because it’s true”. However, Gaga’s rep immediately denied it, clarifying that the two had never been alone with each other and that they had met barely a couple of times. “The Dr. Luke lawsuit is utterly incomprehensible. This simply isn’t true and how dare someone to take advantage of such a sensitive matter,” the rep added. 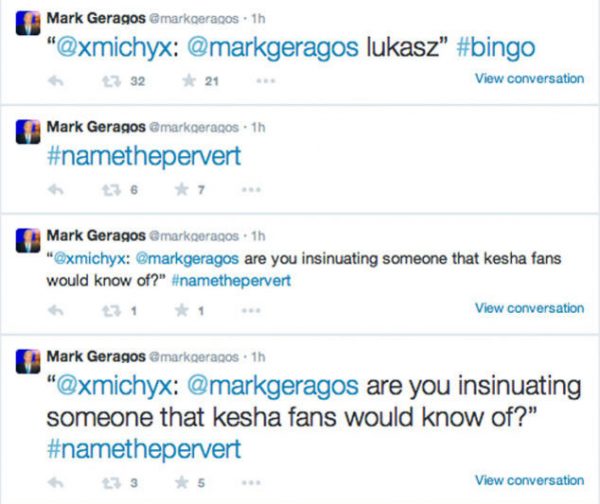 As a consequence of the incident, Dr. Luke introduced the claim defamation in New York Supreme Court, and now judge Robert R. Reed is allowing him to advance in it.

No matter how hard he tries, Geragos will not elude the lawsuit

Right after Dr. Luke presented his lawsuit, Geragos and his firm came up with a couple of –not so convincing– arguments for dismissal. One was that the tweet was just his opinion and that it could not be proven as true or false. The other one was, basically, that it was a “provocative”, playful comment. Let’s see:

“Posting the provocative comment ‘guess the rapist’ on Twitter clearly implies the poster’s intent to engage in a non-serious, gossipy and hyperbolic interaction,” Geragos offered as an excuse. “Additionally, the use of the term ‘bingo’ in and of itself suggests a lack of seriousness.”

He added that the declarations he gave afterward were during a TMZ interview, and considering the nature of the site – celebrities’ gossip and scandals –, it could not be taken seriously. His firm Geragos & Geragos stated that it is not a serious media, such as CNN or the Associated Press. “Instead it is a website that admits its meteoric rise to popularity followed its coverage of actor Mel Gibson’s DUI arrest, comedian Michael Richards’ racist and profanity-laced tirade at the Laugh Factor in Los Angeles, and the news of Britney Spears and Kevin Federline’s divorce. This is not news, it is entertainment.”

Geragos & Geragos brought another argument, stating that the firm is not responsible for what is published because tweets shown on its website are automatically picked from the attorney’s publications. “G&G has no control over which Tweets are posted and the Tweets may or may not be relevant to the firm’s business,” the firm stated, adding that Geragos twitter account is personal, managed and operated by himself.

Any of these arguments worked on judge Reed, and he released his decision yesterday, writing that Dr. Luke’s claims of defamation “are minimally adequate to satisfy the pleading requirements for such claims.”