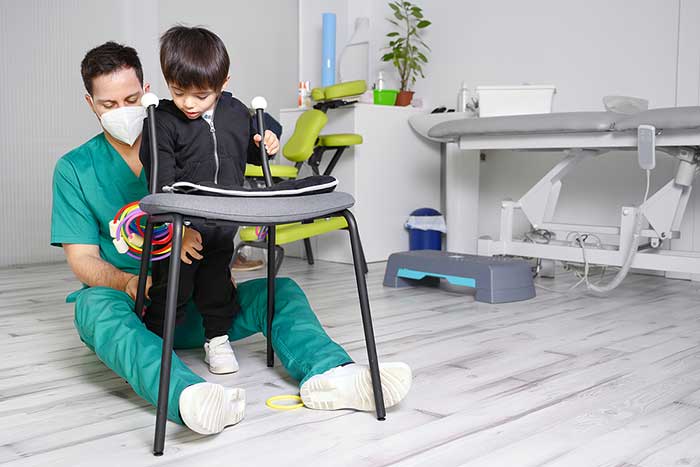 About 500,000 children in the US under the age of 18 have cerebral palsy (CP)—a group of disorders that affects the ability to move and maintain posture and balance. A recent study by researchers at Virginia Tech has found that large doses of intensive therapy (some 60 hours over a four-week period) can enable children to gain function in an impaired arm and hand. Each session lasts three hours, meaning that the child should receive a total of 20 sessions over a one-month period. The study focuses on children with hemiparetic cerebral palsy (HCP—the most common CP disorder). About 40% of children with CP develop hemiparesis, which sees impaired voluntary control in one side of the body.

What is Constraint-Induced Movement Therapy?

Constraint-Induced Movement Therapy (CIMT) is one of a select group of cerebral palsy therapies used to improve movement and function. It involves constraining a child’s more functional arm and hand with a lightweight splint or cast, while the child completes exercises under the guiding hand of a trained therapist. Up until recently, the therapy was known to be effective, but little was known regarding the effect of intensity and type of restraint. The findings showed that overall, the type of restraint used had little effect on the effectiveness of the therapy. However, they did indicate that intensive sessions lasting between three and five hours were no less than “life-changing,” with children who had taken part in these sessions significantly improving their arm and hand abilities. Children who had lower dosage therapy, meanwhile (30 hours per month) had significantly fewer gains.

One of the most promising aspects of intense CIMT is the effect its gains can have on a child’s willingness and motivation. Head researcher, Stephanie DeLuca, stated that because children can have quite dramatic ‘light bulb’ moments during therapy, they can become excited about their own progress. DeLuca stated, “The child sees and feels their improvement and becomes an active partner in the therapy… (the) therapy increases children’s willingness to tackle new and difficult activities.” The findings found that the therapy had positive effects on parents as well, since children adapted well to constraints, thus reducing the potential stress felt by parents. For the researchers, the treatment is potentially transformative, owing to the rate and magnitude of positive changes observed. As stated by one parent whose child received intense CIMT, viewing the treatment in actions was almost like literally “seeing her (child’s) brain changing.” Some children were actually surprised to find that an arm and a hand they may hardly have used exist and can enable them to carry out the tasks they usually relied on their stronger arm and hand for.

A new study has found that children with HCP can benefit from larger doses of Constraint-Induced Movement Therapy. The latter seeks to boost movement and function in people with impaired control in one side of the body. The findings showed that children can benefit from 60 hours of intensive training per week, divided into approximately 20 three-hour sessions.