Traveling is one of the many pleasures. It’s such a delightful thing that even Drs. recommend it. Not only as a way of relaxing, but also as a way of health. Also, it opens our minds. Making us learn and face new realities.

And we have developed, across the years, many ways to keep memories of those places we visit. Taking pictures, maps, souvenirs, and shirts with references to the location. But there is a guy who took it to a whole new, and a bit creepy level.

This guy’s name is Sam Barsky. And Sam doesn’t look like an average Joe, he has traveled a bit as well.

And Sam has posted, as every person would do, pictures of the places he has visited. Mainly on Facebook.

There is something that really makes Sam pictures really different and stand out. Besides his creepy face and looks. Shortly after

The thing that makes the pictures of the Baltimore man so incredible are his sweaters. Not only because they’re of the place Sam is visiting. But because he has knitted them himself, that have won awards at the Maryland State Fair and have been displayed at the American Visionary Arts Museum in Baltimore.

Sam first knitted the sweaters and then he travels and visits them. Apparently, the guys from “The Secret” were right when they say you must think of yourself in the places you wanted to reach. Something that started in 1999 after taking up a knitting class. 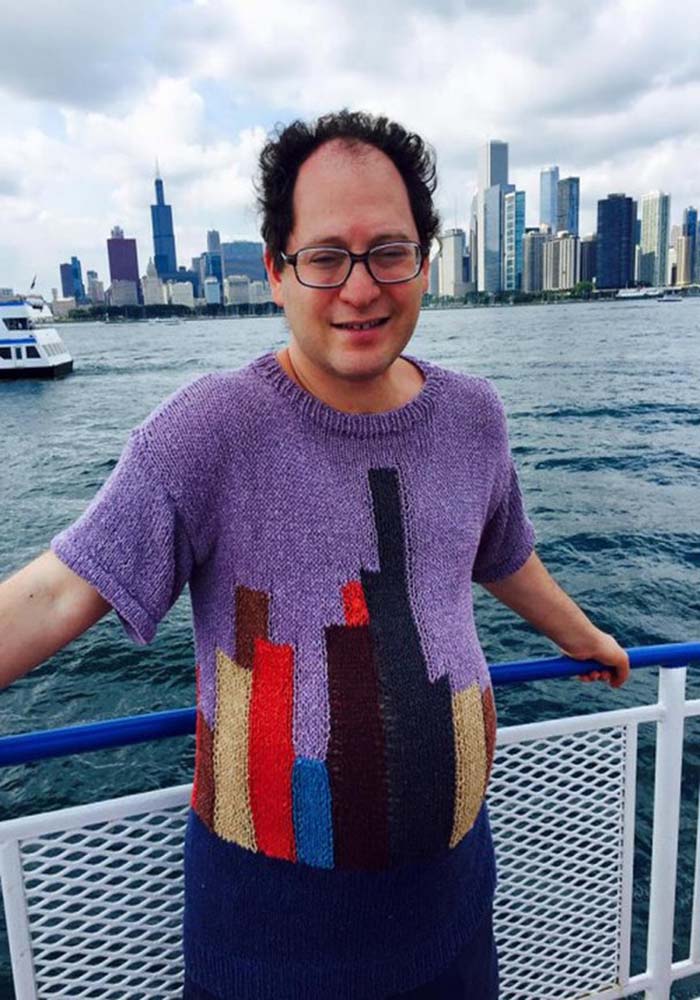 Stonehedge, the Golden Gate and Tower Bridge in London are some of the featuring places he has on his sweaters.

“To this day, I have pictures while wearing 91 of the 103 sweaters around the exact landmark or style of scenery or something quite similar, and I have a goal of doing this for all of them, though most of the remaining ones will require travel to other continents,” he stated.

Also, he has less known spots. Like an aquarium and local beaches. As well not all his knitting art are landmarks. He has also knitted pumpkin patches, mermaids, and many other things.

He has become internet famous, hitting Reddit’s first page. And many have started visiting his Facebook page Artistic Knitting of Sam Barsky leaving suggestions for new designs. As he said  “Anything that crosses my eyes is a potential sweater.” Right now he is working on a new sweater to honor Martin Luther King Jr.