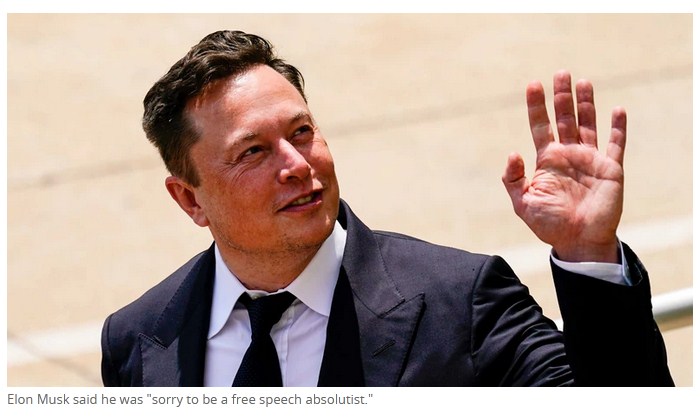 Billionaire technologist, Elon Musk, has revealed that he will not accede to the requests of some foreign governments to block Russian news sources. The founder and CEO of SpaceX, Tesla, Solar City, and Starlink satellites emphasized that he is an absolutist and will only block the internet connectivity of Russia if a gun is placed to his head.

“Starlink has been told by some governments (not Ukraine) to block Russian news sources,” Musk stated. “We will not do so unless at gunpoint. Sorry to be a free speech absolutist.”

The billionaire said he is aware that Starlink satellites operating over Ukraine may be the target of attacks and interference in the ongoing Russia-Ukraine war, and that his company will do everything possible to protect the satellites and their terminals from destruction.

Musk made this assertion against the background that Russian actors have been carrying out series of cyberattacks against Ukrainian’s IT infrastructure. Government officials in Ukraine have revealed that Russians have been attacking the telecommunications and IT security of Ukraine before and after the Russian invaded started.

“Starlink is the only non-Russian communications system still working in some parts of Ukraine, so the probability of being targeted is high,” Musk advised in a tweet. “Please use with caution. Turn on Starlink only when needed and place antenna away as far away from people as possible. Place light camouflage over antenna to avoid visual detection.”

SpaceX plans to launch 12,000 Starlink satellites to provide low-cost internet connectivity to countries around the world, a little over 2,000 of the satellites have been deployed. The satellites are domiciled in low orbit, about 342 miles (550 kilometers) above the Earth. These satellites provide high-speed internet to poor countries.

While several organizations and billionaires in the United States are terminating their business relationships with Russia at the lead of the US government, no individual has stepped forward to state their exact stand on the Ukrainian invasion – except Elon Musk. Many high-profile US businessmen have chosen to remain neutral or silent on their future standing with Russia.