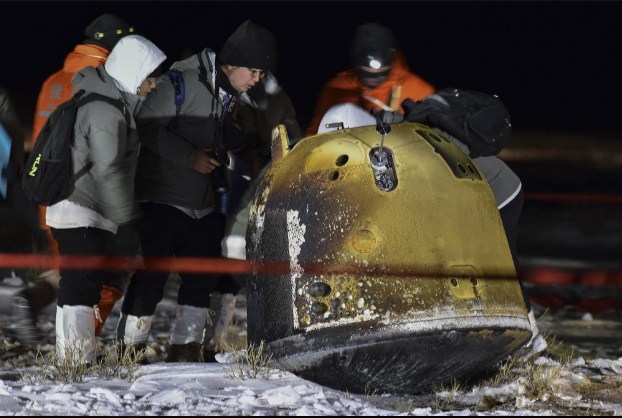 China’s lunar probe, Chang’e-5 has returned to Earth with a precious cargo of moon rocks and soil on Wednesday. The capsule of the probe touched down before 2 a.m. in the Siziwang region of Inner Mongolia. The success of the China National Space Administration (CNSA) to launch a lunar probe and retrieve moon samples back to Earth without any hitch represents a lunar feat that was last achieved in 1976 – 44 years ago.

During its return to Earth, the capsule separated from its orbiter module in the Earth’s atmosphere and then slowly proceeded to the ground on parachutes to break its speed. CNSA officials had stationed off-road vehicles and helicopters to enable recovery crews to reach the lunar spacecraft once it landed and emitted signals to reveal its exact location. In the vast snow-covered Inner Mongolia region of China’s far north, officials retrieved the lunar package and flew it in helicopters to Beijing for scientific analysis.

The Chang’e-5 probe blasted off from Earth on November 24 and landed on the moon on December 1, and set to work gathering lunar samples. The probe scooped about 2 kg (4.4 pounds) of moon soil and also drilled 2 meters (6 feet) into the ground to excavate soil and rock samples which were sealed in a container and returned to Earth.

The last time any country obtained lunar samples was in 1976 when the USSR’s Luna 24 robot brought back rocks and soil from the moon. The US also brought back about 382 kg (842 pounds) of lunar samples from 1969 to 1972. The new lunar samples returned by the Chinese Chang’e-5 probe will be analyzed against those brought decades ago by the former USSR and the US for data on the composition of the moon and other planets in our solar system.

Scientists opine that the samples recently brought back by the Chinese lunar spacecraft will be billions of years younger than those retrieved by the US and USSR decades ago. Space experts urge China to share the scientific data of the new lunar samples with the rest of the international community so that everyone can benefit from the space mission.

“These samples will be a treasure trove!” said Brad Jolliff, director of the McDonnell Center for the Space Sciences at Washington University in the U.S. city of St. Louis. “My hat is off to our Chinese colleagues for pulling off a very difficult mission; the science that will flow from analysis of the returned samples will be a legacy that will last for many, many years, and hopefully will involve the international community of scientists.”

Chinese President Xi Jinping applauded CNSA for the success of the moon mission and said China is well-positioned to explore space for greater knowledge. While speaking at the Beijing Aerospace Control Center, Jinping said China would be happy to collaborate with other world powers to mine the moon and progress to Mars, and even establish human civilization in outer space.