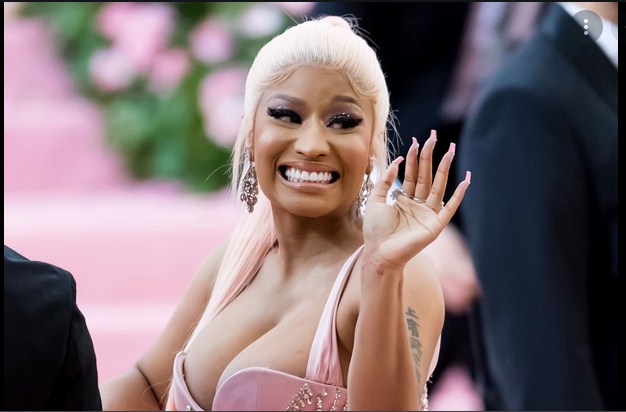 Rapper Nicki Minaj has come under intense fire for her tweet last Monday suggesting that the COVID-19 vaccine causes swollen testicles. Minaj stated the friend of her cousin in Trinidad and Tobago got a swollen testicle after getting vaccinated and suggested that it is for such unexpected side effects that she has not gotten vaccinated.

Then she tweeted again that she had been invited to the White House by Biden officials to discuss her vaccination hesitancy among other things.

The rapper’s tweets prompted some of her fans to besiege the CDC headquarters in Atlanta on Wednesday. The protesters said the government had lied about the efficacy and safety of the vaccines and that Nicki Minaj had just told them the truth. “Nicki Minaj told me the truth…Fauci lied to me!” one protester shouted into a video camera trained on him by newsmen.

Government officials however dismissed the musician’s tweets, saying it is best for everyone to get vaccinated. The White House also put out a statement clarifying the invitation extended to Minaj to come to the White House. The government said the rapper was not invited to the White House, but that a phone call was scheduled for her to discuss her vaccine hesitancy.

“Do y’all think I would go on the internet and lie about being invited to the f—ing White House? Like what? Do you guys see what is happening right now?”

Minaj said she will not go to the White House but said she is open to a living video conference where she would like to chat with Surgeon-General Vivek Murthy and Dr. Anthony Fauci.

A number of personalities have spoken up to support Minaj for her tweet against the COVID-19 vaccination. Lil Wayne tweeted that “we gonna stand with Nicki Minaj through it all,” and a former actress-turned-activist, Rose McGowan, praised her for voicing her thoughts. “I stand with Nicki Minaj and all who see what is happening. Both of us know the powerful elite and it’s likely you do not,” she stated.

TV hosts have also supported Minaj for the tweet and some even questioned the rationale of being invited to the White House for such matters.

“I’m going, to be honest with you: I can see both sides of this things,” said TV host Trevor Noah. “I mean, it would be pretty weird for the White House to have invited Minaj for that tweet. Because normally someone gets an invite to the White House for like, winning a gold medal, or saving their entire platoon, not for tweeting about their cousin’s friend’s scrotum. On the other hand, Nicki’s story makes sense too! Why would you lie about going to a house that’s not even as nice as yours?”