After a huge year, Justin Bieber is relaxing under the Caribbean sun.

The Biebs is having a great time during his Caribbean vacation. And we, well we’re enjoying the opportunity of taking a look at his abs! Justin is taking a well deserved holiday break from his Purpose Tour.

The singer’s enjoying some time off with his family in Barbados. Justin is accompanied by his little brothers, his father, and her father’s fiancée and daughter for the holidays.

Barbados for the holiday.

After spending Christmas in LA, Bieber chose a sunnier destination to spend New Years eve. Justin has been spotted by the paparazzi during his holiday break from his successful Purpose Tour which began in March and will carry on in February.

Justin has had a pretty busy year, with lots of work so he’s taking some down time before the New Year. Going for a swim, taking walks on the beach Biebs is relaxing and recharging for the New Year.

He’s also enjoying the time off with his family. His father Jeremy is there along with his fiancée Erin, and Erin’s daughter. Justin’s little siblings are also there, Jazmyn and Jaxon, and of course, Justin is having fun and sharing with them. The singer is showing off his family skills whether by making sand castles with Jazmyn or by riding a waterbike with Jaxon.

Contrary to his bad boy reputation, Justin loves his family, and having fun with his little sibling is one of his favorite things. The singer’s a family man, in fact, he has talked many times about how he wants to have a family on his own someday, which is one of his dreams. And you can see that this comes naturally to him, look at him practicing yoga with Jazmyn and his step sister Allie. 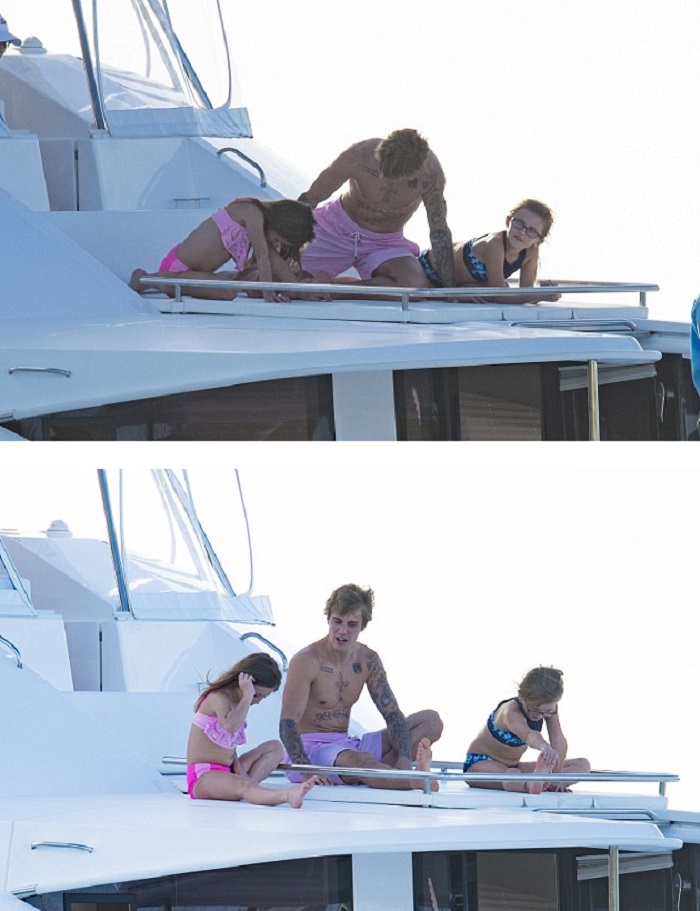 Some lucky fans spotted him on the beach while he was taking a walk, and approached him. Justin was really welcoming and talked and even hugged one of them. Lucky girls!

After three years, JB made quite a return with “What Do You Mean?” on August 2015, which was the sneak peek for his album Purpose. The album got a massive success commercially. It marked a more mature work and image for the Biebs, who finally could leave the flipping hair days behind.

Bieber won his first Grammy award for “Where Are U Know”, along with Diplo and Skrillex. The collaboration had a massive response with over 810 million views on Youtube. He celebrated with a Carpool Karaoke.

Yep, JB comeback was really something. This year he got not one, but three No. 1 hits on the Billboard Hot 100. First “What Do You Mean”, then “Sorry” and finally “Love yourself.” Let’s stress the fact that he reached this earlier this year, in February.

First artist to reach over 10 billion views on YouTube.

Yep, also this. By May Biber became the first artist to crack the 10 billion views mark on Vevo. And the fact is that every Purpose’s video has over million views. Justin is on fire!

Justin deleted his Instagram account due to mean fans commenting on his girlfriend Sofia Richie. SO, JB felt like that was enough with internet trolls and deleted his IG. Sad news for millions of fans, since we are now restrained from his cool videos, smoking hot pictures and well, him.

Biebs hit the road back in March for the Purpose Tour, which has been a success. After the holidays he’s carrying on with the South American and Europea dates, and he announced a seven date stadium tour earlier this month.

The perfect ending for a huge year.