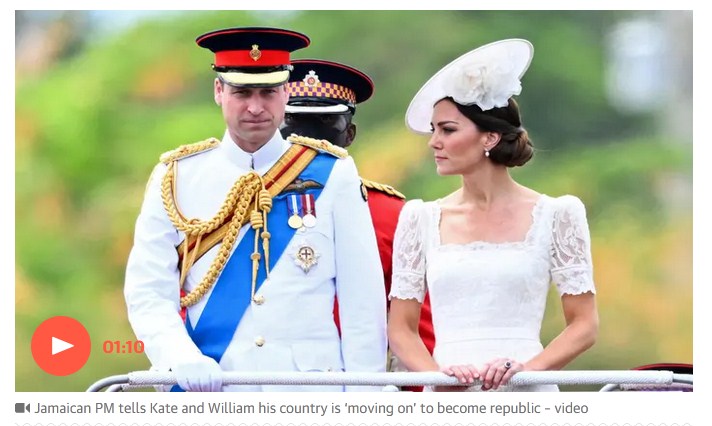 Following an eight-day visit of Prince William and Kate Middleton to the Caribbean to celebrate the platinum jubilee of Queen Elizabeth, the nation island of Belize has begun plans to become a republic by removing the Queen as its head of state. The Duke and Duchess of Cambridge first visited Belize and then moved to Jamaica before ending their tour in the Bahamas.

Government officials in Belize said the People’s Constitutional Commission has set machinery in motion to make the country a republic after Barbados did the same some weeks ago. Belize government officials said they are holding “consultations across the country on the continuing decolonization process” and that this will be completed soon.

Incidentally, local protesters in Belize did not welcome the royal visitors, with villagers saying they did not want the prince and duchess on their land. When they got to Jamaica, the prime minister said his country is working to become a republic, while government officials in the Bahamas told William and Middleton that the United Kingdom should apologize for precolonial slavery and make reparations “for their crimes against humanity.”

Children trooped out en masse to welcome the royals to Jamaica and even shook hands with them through a wire fence, and William and Middleton rode in an open-top Land Rover as part of a military parade to honor them. Critics were quick to say that the military outfit won by the prince and the parade he took part in reminded everyone of colonialism.

Velma McClymont, a writer and former Caribbean studies academic, lamented that even after 60 years of independence, Jamaica remains “an extension of the British Empire…an infant colony, not standing alone.” An associate editor at Jamaica Gleaner, Tyrone Reid, said the visit of the Duke and Duchess of Cambridge to Jamaica “wasn’t a royal failure, but I wouldn’t quite deem it a real success either.”

Reid made it clear that the history of the slave trade must be rewritten in Jamaica since students had been taught the British version in schools for decades. He said the UK must also consider paying reparations to Jamaica and more than the 15 Caribbean countries demanding it given that that is an important step to making the nations heal.

“The man on the street is demanding reparations as well, it’s not just at the intellectual level,” Reid said. “That’s when you know something is really gathering momentum when it’s spreading across a broad section of society. More people are recognizing the horror of slavery and the atrocities that were committed, and becoming aware of the impact that has on modern-day life.”