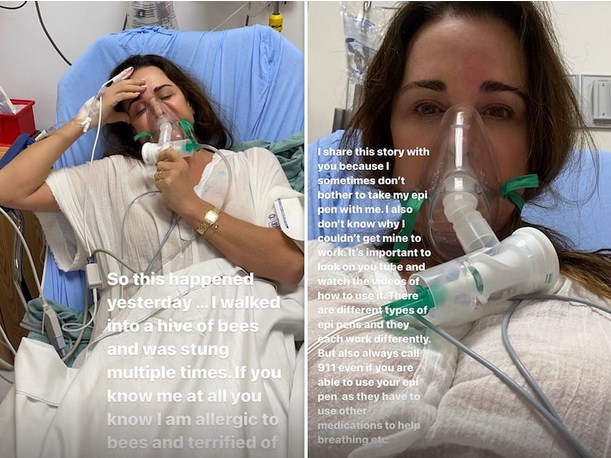 Real Housewives of Beverly Hills star, Kyle Richards, has been stung by bees and hospitalized as a result on Saturday. The actress was unaware that a hive of bees was operational on her property, and she mistakenly walked into it. The threatened bees set upon her, and she all around her property and eventually jumped into a swimming pool to escape the black and yellow buggers.

The 52-year-old managed to call 911 and the Los Angeles Fire Department (LAFD) dispatched four officials to her home. She was later hospitalized at the Encino Hospital Medical Center where doctors treated her stings and stabilized her following her panic attack. According to her, she is very allergic to bees and very frightened of the stingers which invariably got into her hair.

“So this happened yesterday,” Kyle wrote. “I walked into a hive of bees and was stung multiple times. If you know me at all, you know I am allergic to bees and am terrified of them. I can laugh at this video now. But what you can’t see is that they were in my hair and were literally chasing me. My family wasn’t home and for whatever reason, the people that work for me couldn’t hear me screaming for help. My landline wouldn’t dial 911 and my EpiPen was defective and wouldn’t open.”

She posted a security video footage of her encounter with the bees, and she could be seen running around with her confused dogs running behind her to determine what was amiss. The video shows her jumping into the pool. In another photo posted on Instagram on Sunday, she could be seen on hospital admission with lots of medical apparatuses fixed on her.

She was discharged from the hospital on Sunday and officials of the LAFD came around again to check up on her. Although she said she will ensure the offensive beehive is removed from her property, she thanked the LAFD officials for coming to her rescue and the staff of Encino Hospital Medical Center for treating her. The hospital also assured her that there were no more bees lodged in her hair.

Environmental experts say bees are highly territorial, and they attack when they perceive a threat to their hive. In case of finding a hive around your home or on your property, it is always best to contact professionals to get rid of them.