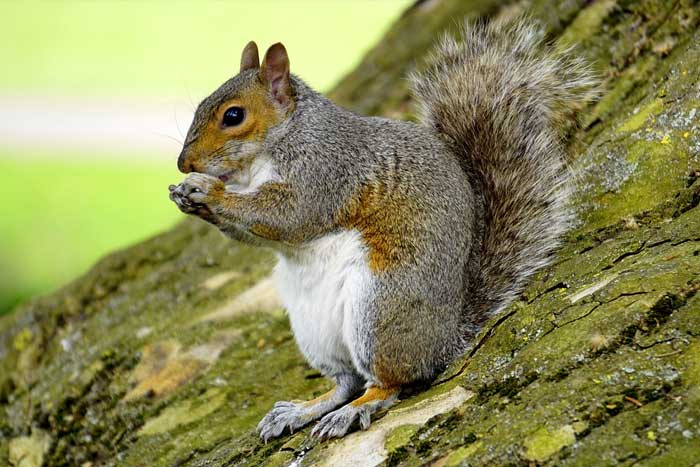 A common animal to see in residential neighborhoods, it’s likely you’ve seen at least a squirrel or two in your lifetime. With their characteristic beady eyes and bushy tails, these small mammals have been a favorite of the big and small screen in recent years. In real life, grey squirrels make barking, buzzing, and clicking sounds; have impressive agility and climbing skills, and are often seen eating various nuts and seeds. However, despite their cute appearance, these rodents can quite a ruckus from their peak morning hours into the early evening. In fact, grey squirrels are classified as pests and can leave severe damage and disease in their wake. Suspect you have a squirrel nesting in your home? Simply want to learn more? Here are some interesting facts about why squirrels are pests and how you should deal with them.

Though grey squirrels look quite friendly and approachable, they have been classified as pests for a reason. In the UK, they have been labeled an IAS (also known as Invasive Alien Species) since they are non-native and extremely harmful. Considering adopting a grey squirrel as a pet? You may want to think again. These not-so-cuddly creatures can cause extreme damage in natural and forested areas by stripping tree bark, raiding bird’s nests, and decimating gardens and orchards. In addition to this, they have played a key role in the decline of other animal populations, most notably that of the UK-native red squirrel. This is due to their uncanny disease-spreading ability. Though many other squirrel species are susceptible to squirrel pox, the grey squirrel is immune. This causes the rampant and unchecked spread of disease in areas with high grey squirrel populations. Additionally, their friendly demeanor is somewhat of a fallacy. When their nest or offspring is threatened, the animal can be downright unpleasant.

Grey squirrels are most definitely pests, but the idea that squirrels don’t interact with humans is far from true. Though they primarily build their nests in trees and bushes, it’s quite common for squirrels to make themselves comfortable in residential buildings, as well as buildings zoned for business activities. Like any pest, a home or office invasion can have some very negative consequences. Contacting the leading squirrel control services in London is a great way to properly assess any uncertainty, but there are also some tell signs to look for if you’re unsure you have a squirrel problem in your home. To avoid further damage to your structure, look for droppings, urine, holes in insulation and vents, and increased squirrel sightings and sounds in the area. Squirrels are most active before the sun comes up, so if you hear many squirrel-like sounds early in the AM, it might be time to call a professional.

The most important advice for squirrel prevention is to ensure your residence is structurally sound. In second or third floor dwellings, make sure windows remain shut, and avoid hanging bird feeders prominently. If a squirrel gets into your house, the first thing to do is remain calm. If it has not created a nest in your building, you’ll likely be able to scare it. For example, if a squirrel enters your chimney or attic, you may want to make some loud noises to prevent it from exploring further. If a squirrel runs into your house, ensure that all doors and windows are open and let it find its way out. Without putting yourself in harm’s way, this is an excellent option to help guide the creature to an exit. Vinegar is also unpopular with the species and may encourage them to leave. If you believe a squirrel has been living in your home or office, the best course of action is to call a pest control service. Because of their invasive status, you must humanely dispatch them once they’ve been captured. As most people will be ill-equipped to do this, involving a professional is the safest route.

Even if you’ve never seen set your eyes on a squirrel, it’s good to be knowledgeable about the seemingly harmless creatures. Movies and television may have given them a cute and family-friendly brand, but many people are unaware of how dangerous a squirrel problem can be. Whether you suspect you may have a squirrel problem in your place of residence or business, or you are concerned for your neighborhood or local woodlands, it’s a good idea to know the scope of the animal’s potential impact. If you’re dealing with an active infestation, there are steps you can take on your own, but calling a professional is recommended. Looks can be deceiving, and squirrels are a perfect example. So there you have it- the ugly truth about squirrels! You may think twice before feeding or encourage your nearby squirrel population, but remember: no matter how they are classified, you should always humanely deal with animals. Hopefully, you now have a better understanding of squirrels and how to deal with them properly should you encounter them in your home.