Epigenetics studies changes that occur in morphology, physiology, or any other trait, that is not influenced by any alteration in the DNA. It’s that ability to change without altering the DNA that allows a single ziggot to become a functional human being simply by having each cell inhibit expression or activate certain genes. Scientific community recognizes that there are cases where these phenotype changes occur with no relation to phenotype or heritability of the trait. That’s why the scientists reached an agreement that only heritable trait alterations are considered under the term epigenetics. 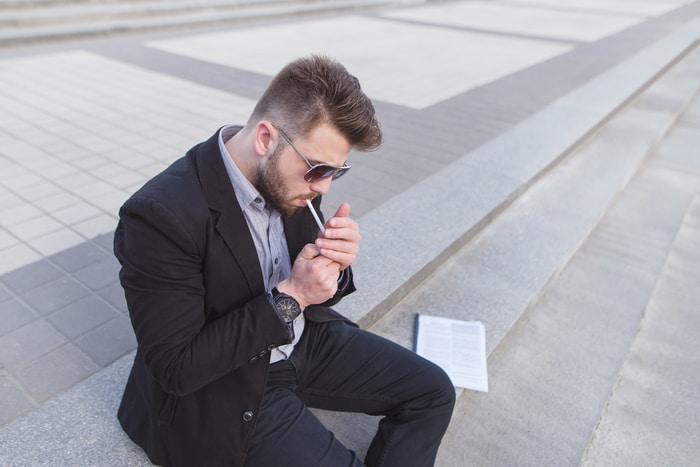 So is there a tie between the epigenetics and smoking? Is it possible that cigarette smoke can influence a change in the way our cells replicate? It is well known that cigarettes lead to a chain of potential health issues such as cancer or respiratory issues, among other risks. However, how deep is the root cause that leads to all those negative health effects? To answer these questions, we need to go deep and look into our body on a molecular level.

The Effects Of Smoking On DNA

Arsenic, chromium, and formaldehyde are only some of the carcinogenic that appear in the cigarette smoke. It’s these molecules that influence the DNA methylation process in which methyl groups are added to DNA molecule. What does this mean? When the new DNA strain is synthesized a certain enzyme called DNMT1 is responsible for the transfer of methyl groups that form the DNA. Cigarette smoke molecules can inhibit the DNMT1 function and lead to misexpression of genes. In plain terms, smoking causes damage to DNA. Think about this the next time you read a full Juul review here.

Human DNA is long, so long that each diploid cell in the human body carries 1.8 meters of DNA. Histones play a significant role in a winding of the DNA strain that allows the molecule to compress and fit inside a chromosome. Histones are alkaline proteins by nature and changes in acetylation of these proteins would lead to changes in histone modifications. One of the most notable histone modifications refers to the control of the transcription, a process in which a certain segment of the DNA is copied into RNA. This sort of data makes a person think about getting a Juul starter kit because studies show that smoking leads to increase of gene expression and accumulates repressive histone modifications which can lead to the development of chronic cardiovascular and pulmonary diseases.

We already mentioned the transcription process and its role in human biology. There is a number of transcription factors that play specific roles like chromatin remodeling, cellular growth, differentiation, and other cellular processes. One such factor is Sp1 protein which is encoded by the SP1 gene. This protein is found at an increased rate inside epithelial lung cells when large concentrations of cigarette smoke are present. This is important to notice because Sp1 factor binds to molecules that inflict reduction in DNA methylation, leading to a series of health issues caused by maternal smoking.

Effects Of Smoking On miRNA

Transport of genetic information from DNA to the ribosome relies on a specific type of RNA molecules called messenger RNA or mRNA for short. mRNA molecules bind short RNA molecules called microRNA or miRNA. These microRNA molecules do not carry information, however, their activity influences the expression of proteins that mRNA holds. Although there are no studies that would determine how smoking influences the activity of miRNA, there are studies that show how cigarette smokes can lead to changes in the number of miRNA molecules in the placenta. Such epigenetic effect of cigarettes certainly makes a person think about using a Juul vape device as a potentially healthier alternative.

Smoking is an addiction that directly influences our health in a negative manner. As this article shows, the influence that cigarette smoke has on our body goes so deep that it changes the way our cells function on a molecular level. Breaking the habit or finding a healthier alternative is ultimately the best way to preserve our health. Maternal smoking is, as the data indicates, a dangerous habit that could damage the baby even before it’s born. It is our obligation to preserve the wellness of those who we love and can’t fend for themselves.