Dr. Dre donated $10 million to help build a performing arts center at the new Compton High School in his Los Angeles neighborhood. This is the latest philanthropic effort the music mogul made.

Dre is investing in the place he grew up with

The center that Dre is investing in will be located in the Compton Unified School District. And it will feature a 1,200-seat theater.

“My goal is to provide kids with the kind of tools and learning they deserve,” Dre said in a statement. “The performing arts center will be a place for young people to be creative in a way that will help further their education and positively define their future.”

Dre’s $10 million donation to the Compton High School comes a few years after he promised to donate all the royalties from his last album, ‘Compton’. The money will go to the new performing arts and entertainment facility in his native city.

The musician/mogul announced his plan during an interview with Beats 1 Radio Zane Lowe, noting he was working with Compton Mayor Aja Brown.

“I’ve been really trying to do something special for Compton and just couldn’t quite figure out what it was,” Dre said at the time. “She actually had this idea and she was already in the process of working on it. I said, ‘Boom, this is what we should do.'”

Once built, the new Compton High is expected to serve approximately 2,500 students.The California native didn’t attend Compton High, though his collaborators Eazy-E and the Game did.

In addition to his personal contribution, Dre will be involved in raising the additional funds to complete the project. 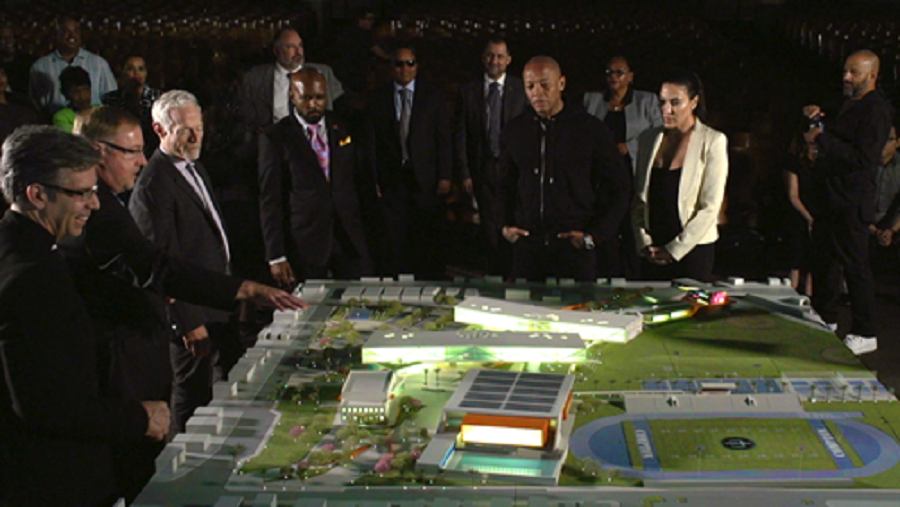 This is not Dre’s first donation

In 2013, Dre and his business partner Jimmy Iovine jointly contributed $70 million to the University of Southern California. The donation had as purpose the creation of the USC Jimmy Iovine and Andre Young Academy for Arts, Technology and the Business of Innovation.

In recent years, the rapper has focused intently on promoting his hometown, both on ‘Compton’ and with the N.W.A. biopic, ‘Straight Outta Compton’. But also through mentoring young talent from the neighborhood like Kendrick Lamar.

In related news, HBO has released the first trailer for ‘The Defiant Ones,’ an upcoming docuseries that chronicles the rise of Dr. Dre and Jimmy Iovine. Their work in the music industry and their impact on contemporary culture.